This is our story, yes, a love story of 30 plus years, one I believe deserves telling. 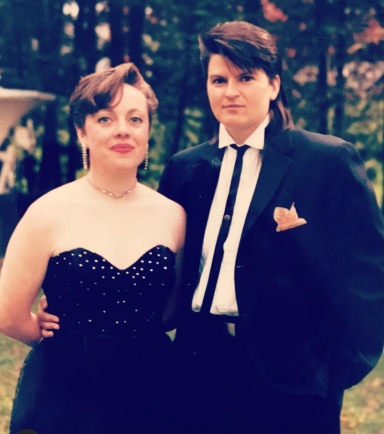 People ask us, as people ask of couples who found each other despite bad odds, how did you two meet? Blind date, we always respond in unison. This gets a laugh or a loud what? and we pause, because beyond that agreed upon fact our two memories diverge. Remembering before we were a we is not easy after three decades riding life’s bumps and bends, those close calls and those definitive calls too.
Thirty years ago. I hadn’t come out to many. She hadn’t either. Bars were smoky and gay ones were just about the only place for gals like us to meet. Somehow we were lucky enough to avoid that thanks to the auspicious suggestion of a mutual friend. Immediately, we affixed like two clouds during a summer storm and ran the sky with booming thunder and flashing lightening. Six months later she packed up her place and moved into mine. Combined we were five, two moms and three kids, with cats, a dog, various fish, and another kid during the summers (a longer story). Old walls came down. New walls were built. Beds got shuffled. A family was born anew. 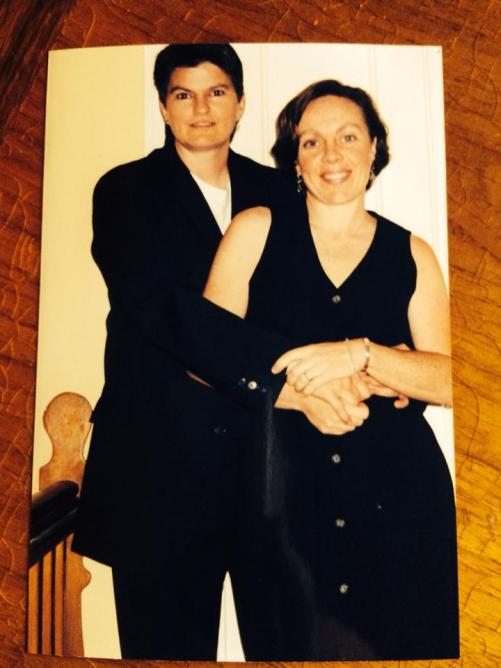 In 1991 a public marriage fell beyond our imagination, regardless the desire to sanctify pressed us, so with the help of a kid-sitting friend, we left the three at home and drove to Maine to stand in All Soul’s by the Sea Chapel and whisper vows. We bought thin gold bands to signify this un-named union, and yes, this is true, when we blessed them in the Atlantic a visible ray of light shot down from the sliver of blue between clouds and filled us with golden hopes. Face to face, alone in the chapel, our voices lay low while the silence became a palpable affirmation.

The glint from those thin bands felt so conspicuous for months afterwards I tucked my fingers away in public. Then life caught hold of us as we filled the squares on our washable oversize calendar with family life: piano recitals, soccer championships, violin lessons and orthodontic appointments. Days became months which became years, going along like our neighbors despite the lack of official paperwork, instead joined by the divine. As our children grew and flourished no one in our sleepy Vermont town thought it not a working marriage, although no one said that word.
The Civil Union debate of 2000 in Vermont brought much to the surface. Our familial bubble certainly got a few knocks during that public discourse. Radio on either in the car or while preparing dinner, we made a point to listen to the hundreds speaking at the Montpelier State House for their allotted minutes. Equal time was given to both sides of the argument and we heard stories that either moved us or horrified us. But as we were no longer living with small children, but pre-teens and full-fledged teens, we used the debate to move their childhood notion of who we were into a politicized discussion of civil rights and the prejudices still defining our family.
With the triumphant passing of Civil Unions in Vermont, we waited only days before we stood in our local Justice’s good parlor and pronounced, once again, that we do and that we will. This time, the State of Vermont backed what we had known for over a decade, that this union with all the confetti and champagne, the solemnity and sacrifice, had clear and undisputed authority. Well, except, not the title or countless privileges granted to every drive-through Las Vegas marriage.

Skip to 2011. Same-sex couples in New York, Connecticut, Iowa, Washington, D.C, Massachusetts, New Hampshire, and Vermont could obtain the same marriage license as traditional couples. Despite the Defense of Marriage Act (DOMA), these states worked hard to create equality for same sex couples, and in that we did rejoice. On our 20th anniversary, we stood together once more to pronounce vows and sign a marriage license. And then watched as our status became the new normal across the country.

Our union began under a formidable sky in a darker time, but unlike Shakespeare’s timeless warning, we did not “die, like fire and powder.” Instead, we somehow, perhaps miraculously, lasted out the tempest, time and time again. I believe we will endure until the blue sky opens wide enough for all to call this love story a marriage.

I believe in marriage. Not the Bridezilla version that clouds TV screens, all sugar and spice but clearly not nice. Instead a marriage where you view the stormy and superb world, together, through the parlor lace, tea in hand.

Happy 30th sweetie, xxoo
** This is an updated post, now with photos, from a decade ago: Let No Man Put Asunder

Dayzzzz of fun 🥳 #californiaadventure #familytime ❤️
About last night… #sunset #supermoon #superfun 🚲🚲#venicebeach
Tables mean nothing to most folks but since COVID I haven’t stop thinking about end tables or coffee tables or plant tables. You get the idea. Making tables is gold to me. As luck would have it, I followed this one out to California and saw it installed as the perfect entrance table. Of course this table went to a special guy who not only helps his world dance but lives with love on the ready. He’s a fan of swirling color too. #newblogpost #linkinbio #frominspirationtoinstallation #diyhairpinlegs #mytwocents
All the fun to date #cali #bike #swim #play #mindcation #familytime