Who could forget that cold December 14, 2012, in Newtown, Connecticut, when a 20-year-old deranged man murdered 20 elementary children, as well as six school staff members? At the time our collective outrage was visceral and visible. The cold-blooded and senseless murders prompted an immediate demand for universal background checks, and for legislation to ban extremely dangerous semi-automatic firearms. And yet, as we face the 4th anniversary of this tragedy, and the 998 mass shootings since, there is little forward movement toward ending this violent epidemic ravaging every avenue along our collective landscape. 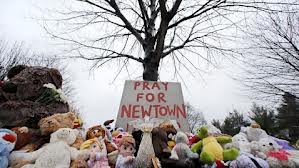 I cannot pretend to have any answers, and quite frankly, have shied away from having the sticky conversation with people who are anti-gun-sense. Trump spoke loud for this voting block with the NRA fully funding his message of fear. You would have thought seeing those butchered babies, and all the babies that have been buried since, the families bloodied by the shooter or those equally torn by their association with the shooter, that we would all be ready to Throw [our] mistempered weapons to the ground, but no, we elected a President too busy fueling hatred to consider untangling these complex issues. But enough of him. Seriously, we have to collectively ignore his middle-school antics and apparent stupidity. He isn’t President yet.

Instead, let’s focus on the extraordinary people who have banned together, despite their own personal pain, their own tortured memory, and have created powerful networks to continue this fight. One such group is Moms Demand Action for Gun Sense in America. Visit their site: MomsDemandAction. Give them money. Join their movement. While you are researching strong forward movements, take a look at: Sandy Hook Promise. Their latest, and powerful campaign crafted the stunning video below.

Don’t let this December 14 go by without doing something. Perhaps I will strike up one of those uncomfortable conversation, and perhaps this time, maybe we will find some common ground. Maybe, just maybe, it will be because of the babies. So many babies still.

The last few weeks I have been trying to piece together my art history, as in when I first picked up paint and brush and hit at a canvas with sincere deliberation. This took some diving into the Archives Department of The New School, and to my good fortune there is a dedicated archivist and her assistant on the ready to dig through paper to find me.
Nothing like having a sister & a lake! #swimmerlife #lakeside #familytime
In my home, we are, with the deliberate intention of finding some joy, absorbing the tranquility of our backyard gardens. Blooms everywhere are making that decision an easy delight. #newblogpost #linkinbio #gardentour #summerblooms #photocredit📸 @mjbouvier
Flowers Gone Wild once more… #newblogpost #linkinbio #summerwins #flowerstagram #blogger #vermontsummer