Ever wonder what writing magic you can create in only 7 minutes? Letting your mind minder into which ever direction you wish will relieve stress as you stumble on to a new idea. Students in my classroom, and classrooms all over, discover all kinds of wonderful when we find the right prompt. A few weeks ago many of us had a blast writing on Vermont Writes Day. You just never know what will turn up when you let your imagination soar.

Out of the several options offered on that particular day, I decided to write on the following prompt:

Object: Out of nowhere, an object falls from the sky, landing directly at your feet. What is it and what happens next?

Well, this is what happened!

It was gold. Most definitely gold. Shiny and hammered smooth. The sun was setting, as they walked across a plane. A wide expanse of scrubby brush and prickly trees all sandy and beige; a monochromatic world stretched out in every direction. But now, this. Fallen from the heights. Fallen in their path. Glittering like a deity.

The dusky ball of red and orange sinking fast beyond the ridge of mountain left behind a streak they followed. Yes, followed because until this golden object fell they were wanderers. Following the sun, spurred to find the place where green and yellow and blue existed. Where brilliant flowers bloomed. Where cool water bubbled up into pools. Where color vibrated even after darkness fell.

She stopped first. Her attention cast down on the object. Her heavy pack slid off her back and hit the earth leaving an indentation in the dirt. He stood tall next to her burdened spine. His face illuminated by the last light of the day, his eyes scanning for cover, his instincts sharp, his worry mounting. Damn it, he thought, we’ll face nightfall stuck in the middle of nowhere.

She fell onto her knees. Having never touched anything quite so precious, she hesitated. Might it not be hot. A broken piece of the sun slipped down into our world? Or perhaps miraculous? A sliver of star sunk to lift them up? Her eyes went to his, for reassurance, as she had done since they first were bound together on this quest. He did not shake his head no, nor yes, but placed his hand on her shoulder, as if to say, go ahead, reach for it, I am here, yes, I will stand by you.

Fun right? Read through the range of students’ (and this teacher) writing in February’s The Voice

How about it? Inspired to write for 7 minutes? Grab a pen and start your object story! Let me know what you discover when something falls from the sky and lands at your feet…

3 thoughts on “the object of your imagination” 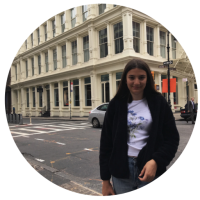