In late March–early April, Spring remains subtle in northern Vermont. Snow still covers the higher ground, while in the valley only the smallest of flowers break through the hard frozen earth. Sunny days might drive the temperature into the 40’s but nighttime sends it back below freezing. This pattern makes most of us stir crazy, but for the maple sugar maker this is a formula for success. Steam rising from sugar shacks once the boiling begins becomes the sign that Spring has indeed arrived and the sugar makers have no control over these fast and furious few weeks; once the nighttime stays too warm the sap slows and eventually stops. This labor intensive process can occupy a whole extended family and their neighbors, all coming together to gather the gallons of sap, boil it down and bottle the syrup.

We are backyard maple syrup makers… we tap the five maple trees in our yard with a total of seven taps. Taught by an old timer over a decade ago, we know just enough to share the fun with guests if they happen to arrive at spring time. Drilling the small hole with a hand crank is step number one, then getting the tap in place, nice and sturdy, is step two.

This year we bought a different style tap, one with a wider spout and a bigger hook for the bucket. Large sugaring operations run plastic tubing from the thousand of taps to large containers to collect the sap, but for us, and those who boil for their own consumption, the individual bucket system works perfectly. For the few weeks that the sap is running we empty the buckets once or twice a day and boil furiously for several hours in the evening.

Most people boil outside, in makeshift shacks in their yard, to state of the art producers who invite you in to see the whole production process in their large sugar houses. We have a hefty six-burner Garland stove, with a powerful overhead fan, so we boil right in our kitchen. On a productive day we might need to have four or five tall pots on the flame at once; slowly consolidating into a flat wide pan as the final step. Not sure how this roasting pan became our syrup pan, but it works like a charm.

When we first asked our neighbor for advice, she said, “When it goes, it goes quick!” At first we didn’t quite understand the value of her directive, but it became our creed immediately! After hours of boiling, sap becomes syrup in one moment, and like sugar, crystallizes directly afterwards. You need to watch and be ready. We use this spatula to gauge the drips… hard to describe, but there is a moment when the syrup sheets just so as it drips off; it is this precise moment we know to pour it into the nearby bottles.

See this dark color? This batch went just a bit too far, but we added some water, boiled a bit more, and voila it’s delicious!

Each season we boil several grades of syrup, from fancy to dark amber. This year we invested in some maple leaf bottles to give as gifts to family members who live on the other side of the country yet are quite fond of our sweet stuff. 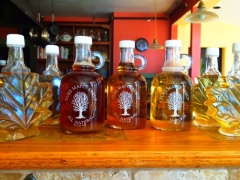 Maple syrup, a true nectar, is a gift from the trees, fleeting and fabulous! It demands attention, but it’s worth every sweet second…!! Pancakes anyone?

Hopefully, everyone is reducing, reusing, and recycling. I’m on board, but not just with my cardboard. I’m all about keeping my clothing, season after season, opting not to buy into each new trend that surfaces. When I look back through my photo stream, I’ve noticed I’m often wearing the same dress, from Venice, Italy, to Venice, California, for over a decade. So I ask you, why hop on the shopping train, why not instead, keep your garments wearing longer? #recycle #reuse #newblogpost #linkinbio #slowfashion #throwbackthursday ❤️#newyorkcity #photocredit @artcitycreative 💥
The last few weeks I have been trying to piece together my art history, as in when I first picked up paint and brush and hit at a canvas with sincere deliberation. This took some diving into the Archives Department of The New School, and to my good fortune there is a dedicated archivist and her assistant on the ready to dig through paper to find me.
Nothing like having a sister & a lake! #swimmerlife #lakeside #familytime
In my home, we are, with the deliberate intention of finding some joy, absorbing the tranquility of our backyard gardens. Blooms everywhere are making that decision an easy delight. #newblogpost #linkinbio #gardentour #summerblooms #photocredit📸 @mjbouvier