With this post I am about to break a promise I made with myself. A promise to not discuss politics during this primary season, but after this week’s latest battles, I feel undeniably compelled to do so. I have friends and relatives and readers who are conservative voters, and those who are moderate independents, and perhaps some as left wing as they come, but I hope none willing to drape themselves in a white sheet and return to “the dark and desolate valley of segregation.” Regardless of your political affiliation, I hope you will stand with me and declare, “as we walk, we must make the pledge that we shall always march ahead. We cannot turn back.” Martin Luther King, Jr. spearheaded a revolution decades ago, but I’m hoping his words will light up the present rise of darkness. “Let us not seek to satisfy our thirst for freedom by drinking from the cup of bitterness and hatred. We must forever conduct our struggle on the high plane of dignity and discipline. We must not allow our creative protest to degenerate into physical violence. Again and again, we must rise to the majestic heights of meeting physical force with soul force” (I Have A Dream). Soul force? Imagine someone at the podium of our present political arena proposing soul force?

As of May 2nd, 2016 the following is fact: “Democrat Hillary Clinton has gotten more votes of any single candidate, including Donald Trump, though Trump has faced 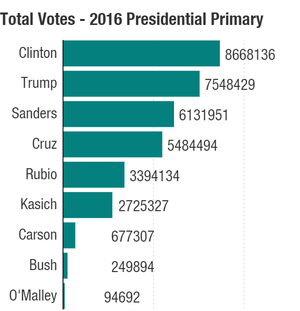 a much wider field” (Domenico Montanaro/NPR). Fact. Yet, if you turn on any TV news or radio or view internet sites or print headlines, you’d never know it. His self-promotion equals that of a peacock, strutting with contempt around his security-guarded garden, oblivious to the real world concerns of most of his supporters. I find it unfathomable to find his name pronounced with any possible conviction when we are discussing such a time honored role as President of the United States. Shouldn’t that candidate be someone who truly understands our country? Who has a record of study, of ethics, of respectability? Yes, I’m down with going against the tide, when the tide is asking one to forgo the principles upon which we forged this nation, you know, liberty and equality; but is that what we have heard spewing from the fountain of sound bites from that improbable front-runner?

No! Instead, we hear nothing except discord. Hatred. Bigotry. Stupid shit. And our incensed populous has reacted to this derisive speech with fear. We are a nation arming ourselves, at an ever alarming rate, as if having more than 300 million guns isn’t enough to protect us from all this fear monger threatens.

“Guns in bars. Guns in airports. Guns in day care centers and sports arenas. Conservative state lawmakers around the country are pressing to weaken an array of gun regulations, in some cases greatly expanding where owners can carry their weapons” (Robertson & Williams).

“West Virginia and Idaho have approved laws allowing people to carry concealed handguns without a permit or firearm training — and, in many cases, without a background check. Texas has given residents the right to carry handguns openly. Oklahoma appears set to pass a similar measure in the next several weeks” (Robertson & Williams).

“Several states, including Georgia, Arizona and Michigan, have enacted laws that prohibit the police from destroying firearms that have been used in crimes. Instead, the weapons must be sold to licensed dealers or to the public at auction” (Robertson & Williams).

Guns, and more guns. And, despite my own personal distaste for weapons of destruction, mass or singular, I can understand how this mounting fear draws people to search for safety, even in the most illogical manner. We are bombarded second by second with reports around the world that would make the most adventurous of us question leaving the sanctity of our own living rooms. We want to arm our kindergarten teachers. Carry guns into churches. And for god’s sake lock-down our borders. But…and you knew a but was coming, my always but, it is past the time to stop the insanity. Shut off the TV, even NPR. Stop whatever is fueling your paranoia. And for the sake of your children’s children, stop listening to “the businessman.” (For the sake of my own sanity, I have renamed this most unpresidential – presidential GOP candidate (god help us all), “the businessman.” Trust me, this was the most polite option I opted for… ) For the obvious reasons, such as the offensive behavior he has exhibited since he began his quest for Emperor, he is not worthy of anyone’s attention, therefore, I will not use his name. He is a fear monger, voicing the obscene, triggering a trail of ignorant retro-thinkers wrapped in a frayed confederate flag.

Nice talk for a leader. Oh no, wait, your kindergartner will inform you it’s hate speech in a suit. A $5,000 Brioni. Spokesperson for the working class? How? Do Americans admire his swagger and insults and mistake that for a forthright and earnest caring? Or do they just admire a bully who’s willing to speak their darkest thoughts, inciting fear and anger by Making America Great Again? I am curious if anyone remembers what financial and moral shape our country was in as the last red coat left office? I’d say, our present America is pretty great in comparison.

“For a certain group of voters, part of [the businessman’s] appeal is obvious. They hear their own views echoed in his divisive and bigoted rhetoric. They’re the ones who nod in agreement that Mexican immigrants are rapists who are “bringing drugs” and that all Muslims should be barred from entering the United States. They’re people who think the linguistic anachronism “the blacks” sounds appropriate. They yearn for the return to a long-lost “great” version of America that it’s safe to guess existed before the implementation of the Civil Rights Act“(Desmond-Harris).

“[the businessman] and his supporters serve another function, too: They expose the falsehood of the seductive myth that with time and increased diversity, racism will inevitably evaporate. Whatever happens to [the businessman’s] bid for the White House, the people who flocked to his rallies, who deployed the wall he hoped to build as slurs, will still be around“(Desmond-Harris).

“We should have a healthy fear that we’ll never get over the continuing effects of racism instead of a sugarcoated assumption that time and shifting census data on race will fix it…[the businessman] and his supporters have reignited that fear…” (Desmond-Harris).

The media has handed this man all that he needed to be seen and heard around the clock. I can not count the amount of speeches I saw interrupted because the businessman was once more at a podium with a row American flags flanking him. Even this week, the New York Times ran this headline on their front page:  Trump Shares Vision for First 100 Days If He Wins Election (Healy). Seriously? A vision? Not a plan or proposal or portrayal of governing. Nope, a vision, and yes, it involves a wall. Not much else apparently.

Republicans have a choice. They can rally around their KKK affiliated one, or take back their party at their convention. They can rally around the lies or fact check themselves. For the rest of us, the choice is clear. We will not allow our country to become overruled by this fear-mongering nasty man and his horde of haters. We just will not. We will pull out our wallets, our phone books, we will speak on the sidewalks and malls and church pews, and we will stop this cancer from spreading into our White House. We will demand an end to fear and violence and a return to soul force.