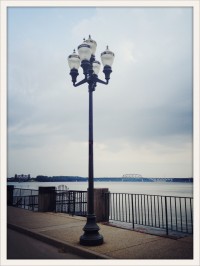 I’ve just returned from scoring AP English Literature exams, 1400 of them to be exact, and I will not pretend to have much of a brain left to blog. But besides that reality, this post, which I wrote a few years ago, speaks of my experience then, and is echoed just as vividly now. There are multiple worlds that collide while I am in Louisville: the privileged AP students whose essays I am reading and the homeless camping about the city. I have no answers to our national questions of poverty and race and inequality, only these brief personal reflections, only this re-post from 2012 in which to decipher my myriad of emotions. I thank you old-time Nine Cent Girl fans for re-reading. I hope to be back on solid ground next week.

This morning I woke feeling a bit off kilter. After eight days of being in a very intensive and regimented program of scoring AP English Literature essays, I suddenly had six undefined hours ahead of me before I needed to be at the airport, and my morning felt oddly stiff, like donning a new pair of shoes. I attempted to lay in bed but dawn called me out and up and lead me to wander beside the Ohio River, which snakes along the backside of Louisville, Kentucky.

For me, walking generally leads into mulling over ideas and then to writing, and this morning was no different. Each step I took brought a flood from the entire week… Close to 3000 AP Readers descended on the Kentucky Convention Center to read and score exams in English Literature or English Language. Every moment was accounted for, as was every exam booklet. Working shoulder to shoulder with a group of strangers, focused on one task, can lead one through the myriad of emotions, ranging from super-charged to super-frustrated. But all during the week, what stuck with me, was the generosity of those in service all around us. From the dozens of food service personnel, to hotel staff, to the runners bringing us more and more and more essays to read…we were aided by countless people all day long.

There is always talk among teachers about the thankless tasks of our job… the low pay, the state regulations, the large 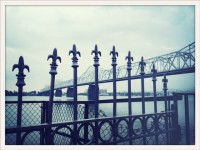 class size, these lists can become exhaustive… but every once in a while comes a reminder that in giving, one simply must give with no thought of the return. As I read through hundreds of nameless papers, I saw in the curve of their script or in the blocking of their print, their hopeful faces and the score of teachers, parents, tutors, coaches, or peers, all who helped these very students reach this moment in their lives where they write and write and write again. I realized, without any thanks from them, I was searching for the spark in their essay, the one or two remarks that would distinguish their writing, and all of that came from dedicated people. After all we were reminded daily by our Question Leader, the next essay was written by someone’s daughter or son, someone’s student.

On my early morning stroll, I passed a group of people with brooms and dustbins, out beautifying before the tourists and careless folks came to litter the place up. Most of the sweepers held their faces downward, toiling away, as I passed them. The steel grey of the water and sky matched the link fence corridoring my path and the bridges spanning the river. Louisville, like most cities, has areas beatified with verdant parks and flowering planters. In the early light, there was little color, and all those off feelings came to a tipping point when I spotted a figure on the ground up ahead. Actually, all I could make out was a dirty blanket and scattered trash around the curve of a spine. 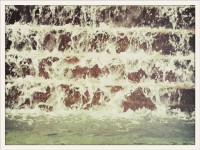 As I walked closer I saw a foot moving, up and down, as if keeping time, and then I heard the low strains of a voice. It took another few steps to realize this voice was singing. The woman had taken her shelter for the night beside the cement wall, laying on the cement walkway. She was looking up at the colorless sky, the same one I was gazing at, yet how different our views. Here I was, with luck and plenty directing my course, while hers had led to a night protected only by a barrier wall.

I walked a little past her, listening to that soulful hymn, until I could not hear her any more. Then I stopped and walked back. Here was someone’s daughter, someone’s student. How could I help but reach into my wallet and hand her what I could? Her brown eyes woke me to all I was missing on this day. She halted her singing just long enough to give her appreciation and then once again let that soft melody sooth us both.

It was then, as I continued my stroll back to my hotel, that the lesson of my week came to me, the whole point of my exhausting work; that instead of filling our days with the faceless, or our own internal demands for more and more, that we all take one short moment to look into each others’ eyes, if only to say thank you for your song, your words, your help today.

“Here on the pulse of this new day
You may have the grace to look up and out
And into your sister’s eyes, into
Your brother’s face, your country
And say simply
Very simply
With hope
Good morning“

****Dedicated to all the teachers just winding up their school year!