Writers avoid writing. There is always something more pressing or entertaining or distracting than sitting in the 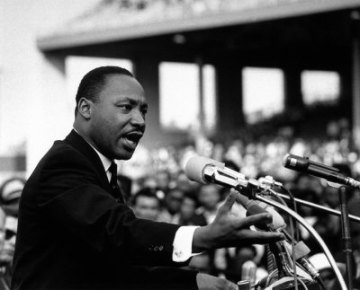 stillness to pound out the words racing inside one’s head. Always. That is until those words get so thick and fanciful or loud and obnoxious, growing exponentially inside your head, until you feel, in the most visceral way, that unless you pound them onto your screen you will know no peace.

Today is that day. Racing words are forcing me to write because ever since August 28th there has been too many to ignore. Why August 28th? Well, that date is remembered as the greatest March on Washington; on the recent anniversary, President Obama stood on the same steps as Martin Luther King, Jr. and reminded us that 50 years ago King “gave mighty voice to the quiet hopes of millions; how he offered a salvation path for oppressed and oppressors alike.”

Every literate person on the globe knows the improvised section of Dr. King’s iconic 1963 speech: ”I have a dream that my four children will one day live in a nation where they will not be judged by the color of their skin but by the content of their character.” King’s lofty dream is not fully realized, but as President Obama reminded us, “To dismiss the magnitude of this progress—to suggest, as some sometimes do, that little has changed—that dishonors the courage and the sacrifice of those who paid the price to march in those years.” I appreciated Obama’s reminder; he himself is living proof of that courage and sacrifice.

When I re-listened to Dr. King’s speech on the 50th Anniversary another passage began to race about in my head:

“Let us not seek to satisfy our thirst for freedom by drinking from the cup of bitterness and hatred. We must forever conduct our struggle on the high plane of dignity and discipline. We must not allow our creative protests to degenerate into physical violence. Again and again we must rise to the majestic heights of meeting physical force with soul force.”

Looking back over the five decades since King and thousands beside him marched, I wonder what has become of this notion, to not “degenerate into physical violence.” My mind raced up and down the decades, scanning for revolutions that brought about significant change by soul force. Then I stopped, did I even know what that term meant? Soul force? (Luckily, there is an avenue that provides answers to all our questions: Wikipedia!)

Gandhi wrote, “Truth (satya) implies love, and firmness (agraha) engenders and therefore serves as a synonym for force. I thus began to call the Indian movement Satyagraha, that is to say, the Force which is born of Truth and Love or non-violence, and gave up the use of the phrase “passive resistance”, in connection with it, so much so that even in English writing we often avoided it and used instead the word “satyagraha” itself or some other equivalent English phrase” (Satyagraph). 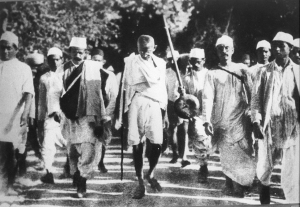 Here I paused and tried to wrestle this notion of soul force or satyagraha into my lexicon. Not a passive response, but not a violent one either. I wondered, how was this possible in India, at such a pivotal and explosive time in their history?

“Gandhi introduced a new weapon in the Indians’ campaign for justice. That weapon, satyagraha, was the culmination of a profound development in Gandhi himself. The reason why satyagraha found favor among the Indians was that it marshaled their inner most resources, and thereby gave them the dignity which their legal disabilities sought to deny. ‘Satyagraha is soul force pure and simple…’ and that is the way they understood it. It was not a weapon of the weak” (South African History Online).

“Gave them dignity” and “not a weapon of the weak” joined the other words racing about my crowded mind. Obama’s eloquent speech further connected Gandhi’s beliefs to King’s: “…we would do well to recall that day itself belonged to those ordinary people whose names never appeared in the history books, never got on TV… In the face of hatred, they prayed for their tormentors. In the face of violence, they stood up and sat in, with the moral force of nonviolence.” There it was again, that word: force. From Gandhi to King to Mandela and the nameless others since who have not sat idly by watching injustice, but who haven’t taken on the mantle of “the marvelous new militancy” either, we can recognize the power of this force (King). “There may be times when we are powerless to prevent injustice, but there must never be a time when we fail to protest” (Elie Wiesel). Protest they did; but not with their fists.

In Gandhi’s time the march was for independence while Martin Luther King Jr. strove for civil rights; so what is an issue worth marching for today? Quite simply, I don’t want to see another date added to the list of mass murders in our country. Nor do I want to debate with the vocal but small number of registered gun owners in our country (estimated at 30% by several good groups including Just Facts) their 2nd amendment rights. But who can argue we are a nation crippled by gun violence? It is time for us to have the conversations needed so that we can be a nation where our children, regardless of race, feel safe. Obama reminded us, “The March on Washington teachers us that we are not trapped by the mistakes of history; that we are masters of our fate. But it also teaches us that the promise of this nation will only be kept when we work together. We’ll have to reignite the embers of empathy and fellow feeling, the coalition of conscience that found expression in this place 50 years ago.”

I think the safety of our children at school, our Navy employees at work, ordinary citizens at a movie, or a teen walking home with his Skittles, should be the issue we march for. Gathering our strength from satyagraha just might get us there.

5 thoughts on “I March For Soul Force”