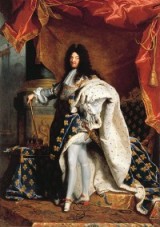 heeled shoes… (Christian Louboutin carries on similarly with his signature red-bottomed heels). Thousands of miles away Cardinals flock to the Vatican in red wide-brimmed hats and caped long coats. Red also denotes the naughty. Satan is swathed in red from his horns to his tail in his fiery Hell. Fallen women lurk in red-light districts with red drawn across their lips. The Scarlet Letter is, well scarlet. Yet, despite the piety or the fallen, Red is simply good luck. Just ask the Chinese.

Before the 1800’s red dye was made from a bug (although this detail was a treasured secret for decades). But a tiny red bug, hand collected by the masses who never dared wear such brilliance, was dried and crushed into a powder worth its weight in gold and reserved as a royal color for Presidents and Dignitaries. Even after the synthetic dye hit the market red denoted the wealthy, the lovers, the exotic… those residing on a throne.

Literature tells us that the first mortal character who dared walk the red carpet dates back to 458 BC, in Aeschylus’ play Agamemnon. When returning from Troy, he is greeted by his not-so-happy wife Clytemnestra, and in her most deadly plot she encourages Agamemnon to cross into their home after his long time away by walking on a red path:

“Now my beloved, step down from your chariot, and let not your foot, my lord, touch the Earth. Servants, let there be spread before the house he never expected to see, where Justice leads him in, a crimson path.”

No fool, Agamemnon, is hesitant, for only gods were permitted such treatment:

“I am a mortal, a man; I cannot trample upon these tinted splendors without fear thrown in my path.”

But as the play unfolds we learn that this was the last walk Agamemnon made… Ah that vengeful Clytemnestra!

The red carpet treatment remained the domain of the gods until the night Grauman opened his famed Hollywood theater in 1922. The premier of “Robin Hood” with celebrated actor Douglas Fairbanks brought bright lights and big crowds to the chinese theater and began what we now consider standard with a season of Red Carpet events honoring those who dramatize lives which only have a veiled resemblance to our own, but with sun-kissed skin, pouty reddened lips, glossy luxuriant hair, all golden like the gods; telling film stories within an arch that rises up in opposition, but as sure as the day, ends with the bad guy’s demise and the prize girl collected. These icons on our screens now act as our cultural gods as they take to the red carpet…

Actors often mouth what we all long to say to each other or live the dreams beyond what we dare; the greatest actors enact our deepest emotions. When they walk over the red carpet reserved for the gods, we see them as the divine they portend to be; they embody men and women in history and literature or those that have graced our stages and silver screens, magically here now in the flesh. “Shakespeare in Love” voices this transformation perfectly, in the following scene, when the actors in the Admiral’s Men enter the theater but the “foolish” Producer, Fennyman, does not recognize them:

…there is a dramatic interruption–the public entrance door is flung open and SIX MEN make a loud entrance, headed by NED ALLEYN, the actor, who is a handsome piratical figure with a big voice and a big sword.

Huzzah! The Admiral’s Men are returned

He gets various reactions. HENSLOWE and WILL shout his

name joyfully, some of the actors are friends with the

new group and behave accordingly, others know they are

out of a job. FENNYMAN recovers, or tries to.

ALLEYN slaps him aside with his sword.

Silence, you god! I am Hieronimo! I am

Tamburlaine! I am Faustus! I am

Barrabas, the Jew of Malta–of yes,

Master Will, and I am Henry VI. What

is the play, and what is my part?

I am the money!

Then you may remain so long as you

remain silent. Pay attention and you

will see how genius creates a legend.

We are in desperate want of a

Mercutio, Ned, a young nobleman of

And the title of this piece?

I will play him!

The actor tells us “Pay attention and you will see how genius creates a legend,” and on Oscar night we will honor these actors for just that transformation. And there are many of them…

Nine films alone for the Best Picture category. Four more different films if you add Best Actor and Best Actress categories. Another added with Actress in a Supporting Role. Add four when you include Costume and Cinematography. Seriously, five more in animated films plus another five for foreign films Best Picture. We haven’t included all the other categories and we are at 29 films for 2013  … that’s quite a few films peopled with our present day immortals all set to sachet down the red carpet rolled out in front of them. In a tux or gown this Royalty arrives with a capital R.

Red carpet night, Oscar night, is time to cheer those who have brought us with them to Mount Olympus and beyond… Best of luck to them all!

10 thoughts on “Rolling out the Red Carpet”

House of Heart
The Literary Edit