Thinking about a dinner party? Overwhelmed?

As far back as I can remember, my mother held several grand dinner parties a year. Sometimes they were family reunions, Irish Catholic style (code for large!) with sixty or more people milling around a table laden with copious platters of meats and cheeses and veggies. Other times her dinners were comprised of a select six couples. The dinning room table set with her silver flatware, bone china and crystal flutes placed just so. Candles lit by 6:30 surrounding a seasonal floral arrangement in the center. 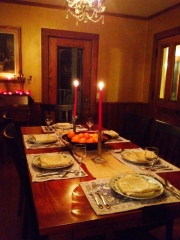 No matter the size or menu, from summer backyard barbeques to holiday carved roasts, my mother treated her guests to lively conversation and an opportunity to celebrate their coming together. Although my mother did work part-time outside the home and dealt with the complexity of six children coming and going, she did have hired help in the kitchen, time to shop and generally more occasion to prepare than most of us do these days. This lack of time has inhibited me from stepping into a similar role as hostess to the world…

But as the bells of 2012 ushered in the New Year, I set my resolve to hold at least one memorable dinner party a month and ignore the reality that I am a busy working mother and days to cook and prepare are not within my scope (nor my culinary skills!). But with the help of two similar-minded friends we concocted a brand new approach to achieve my resolution: a shared dinner party. While this idea is still in its early stages (we have executed our first month’s dinner with great success) there is excitement building for future meals.

Before you think, ‘oh no, not another potluck Jello-salad affair’, let me state clearly that the two friends planning with me are serious about food, so much so that both have blogs: Mj Bouvier writes Savvy Skillet and is the chef at our Donomar Inn, while the other, Darcie Abbene pens I Know Where the Leeks Are and also writes a food column for our local newspaper. So, armed with these two foodies I feel success already! We also have other friends who dabble in pastry or desserts, breads or other specialties, so the plan is to combine together to create orchestrated culinary feats. What better way to shake off the gloomy winter than to create a gathering of delightful friends and exquisite dishes?

In my mother’s day (actually, she is still holding sensational dinner parties) a guest arrived expecting hot hors d’oeuvres and to be ushered into the dining room for the appointed meal. But our plan is that these dinner parties include the cooking. Some preparation can be made beforehand (or dishes, such as the cheesecake I made the night before) but the exhilaration or ‘joy of cooking’ is shared between the talents of the guests. Menus are carefully planned, down to the spices, so that every dish complements the next, but in the end your plate resembles nothing that you alone would have served. Brilliant I would say, given our busy lives and demand for delicious foods… and limited budgets.

Our first meal involved my two friendly cooks who started with preparation in our kitchen, planned so that when the honey and garlic drizzled Brie came out of the oven, the chicken parmigiano went in (yes, our first dinner had an Italian theme). This gave us time to sip wine and trade stories about our lives since we last met. Among our small group was a recently engaged couple to cheer, another friend who suffered a bad fall and his injuries were inquired, and finally a father and daughter, recently returned from walking the full 800 km of the El Camino Santiago pilgrimage, regaled us with vivid anecdotes and precious photos.

Our evening was filled with all the stuff you always do in a kitchen preparing a meal for 10, except instead of a 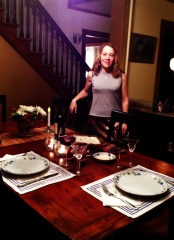 singular host sneaking off to toss the salad or garlic the bread or boil the pasta or stir-fry the veggies, there were several of us to complete those tasks. The conversation kept going as food was prepared and plated and then everyone gathered to sit at the candle-lit tables with fresh glasses of wine. How very grown up and doable was what I kept thinking as we all relaxed and enjoyed ourselves. One person could not prepare a better meal but if it had been attempted that person would be dashing back and forth from table to kitchen worried if all were remembered. Instead, with this cooperative menu, everyone shared their knowledge and the labor. Before the cheesecake (recipe) was sliced and eaten there was the whisper of our next meal’s theme: maybe tofu as the focus?

Scan your friend-lists and I am certain you will discover exactly what we found, there are many amateur chefs who might not take on a three-course meal for 12, but who would happily create one dish… Already our next guest list includes a young man who cooks at a nearby health food store. We all can’t wait to pick his brain, watch him chop and swap kitchen secrets!

4 thoughts on “The Dinner Party Revisited”