“The charge of high crimes and misdemeanors covers allegations of misconduct by officials. Offenses by officials also include ordinary crimes, but perhaps with different standards of proof and punishment than for non-officials, on the grounds that more is expected of officials by their oaths of office” Wikipedia.

Perhaps there is the catch… in the very notion that this President took an oath to uphold anything expected. Or is his reign a venture into a new America where one man rules unchecked and applauded like the clown in the Dunk Bozo booth at your local fair where gawkers stand in shame listening to off-color taunts? Patterns are clear. Regardless of whether you voted for Trump or not, can you say that he is a role model for you or your teenager? Someone you would trust with your college-age niece? If you say yes, are you for sure 100% sure? 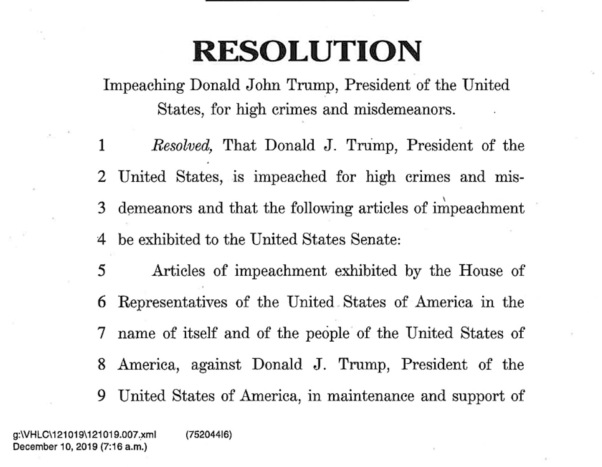 Maybe you admire his fuck-you approach, his drain-the-swamp rhetoric, his glossy but vacant third wife, or the fact that he is someone you imagine you might be able to beat on the links? I get it, no really I do. It’s not that complicated. You’re an all caps person too. Someone who likes to scream on social media with font size oversized: am I right? Someone who runs your business or manages your affairs by insults? He’s your guy.

I really can’t say that I fully understand how electricity works, but I know how to turn the dimmer switches in my living room. While I’m not a constitutional scholar, I know enough to know not to bargain over illicit political gains via a party phone, but more than that, morally speaking, I know not to insult a beloved community member whose widow is facing her first Christmas without her person of almost 4 decades, and I think most of us get that is just shitty behavior which I would not tolerate in my classroom or home or pew yet every Republican suit-wearing political secretly smiles about. (Do you really smile and like his frat boy locker boy prattle? Please explain!) His party will not call this guy to task over anything. Not high crimes or misdemeanors or crash and unrelenting rudeness or documented infidelity or tantrums in the Oval office or ignorance on basic knowledge or any of the misleading misinformation that he tweets by the hour. Seriously? I’m struggling. I wish they would though. I just wish someone close to him might remind him that he is leading a nation. Our great nation. And I get that it bothers him that people disagree with his version of climate change, military policies, international concerns, maybe even what to eat for dinner, but many do. Disagree. Take health care for instance. People have differences on the topic, so that to bridge that gap, a sensible debate is needed to navigate though it all. But that is a distant dream, one born from my ultra liberal and highly educated stance on the basic needs of humans to grow and develop and become the very best that this nation desperately needs to face our challenges.

Please don’t assume I’m happy about these headlines. I’m not. I am frustrated by the party divide, our paid-by-us politicians (including the President) who do nothing except fan the fire of division. I want a better world. One where all the students who sit in my class room arrive with a full belly and warm clothes, coming from a home of books and love that let’s them imagine a terrific life ahead for themselves, where whether through trade or commerce they build their future and extend our community in ways I can yet imagine. Ways that bred betterment.

What I don’t want is a President who is supported by the world’s favorite dictator. Any of them who he admires.

Oh you guys… If there is only one Republican reader of Nine Cent Girl still reading, help me! How can we return to a place of science, compassion and choice? Tell me how we can unite under this administration. If you can’t then stand aside, and let someone else figure out this disaster of a planet before all is lost. Really, it is that dire. We are at an abyss of epic proportions. We are also on the eve of the Winter Solstice, and Hanukkah, and Christmas, and 2020. It is time for us to deal with the harsh facts, separate from politics and power. Please talk to everyone you know about the health care crisis, the gun-violence epidemic, millions of kids facing poverty, the death of our oceans, and everything else reason compels us to acknowledge. Make this the holiday of true discourse. And if you’re still not willing to impeach the guy, then at the very least rein him in and establish a tone of respect and education and one that your great-grandparents might be proud of you for setting forth.
In all my most earnest wishes,
Happy Holidays dear ones. Be safe out there.

As we slip closer to becoming the dystopian world we used to chuckle over while reading the fantastical novels of our youth, I now wonder about ever leaving the house. Even then paranoia creeps in while watching/listening/reading the news. It’s melting ice caps and fire storms. It’s waring tweets from men plenty old enough to know not to taunt but daily they do. There’s corruption in Facebook, phone apps listening, and Amazon with one-day deliveries causing insurmountable mountains of cardboard. Gun violence passing epidemic proportions that not even George Orwell would have imagined. Rational stuff gone daft too, like the inability to debate issues in Congress or use Science as a base for fact. Everyone is distrustful of any branch of government. People are retreating, especially the L.G.B.T., unsure if our marriages or jobs or civil rights will stand this latest round of Supreme Court discussions.