This country. This #America gone #hashtag #crazy yet stalled so fucking bad in Washington that even the Senator’s families don’t live there anymore. Just fly in and fly out to cast their party-driven vote. This America. A jumble of contradiction at every turn. Wide rural vistas divided by pristine forests and muddy rivers. Farmland rich with harvest promise. Yeah, promise. But that’s a  lily-white view tarnished once one passes under a big-mother Confederate flag flying with bravado, (yeah, sadly we saw those) or an oversized Trump billboard (crazy, but yeah, saw those too) promoting all the trappings of White Supremacy with his sneer. That sneer. Sickeningly an advocate of hatred. (Will anyone really be able to vote for that world, his world of hate?) After our recent 14 State and 4,500 mile drive-by, and the current racially driven atrocities, it is clear to this blogger that the veneer of the American Dream is wearing thin, if not for all of us, at least for the Other in this country.

Many cities appear to be in a standstill. Locked-in and locked-down. Growing and sprawling suburbia yes, but inner-city life is stagnated in poverty, perpetuated by a mist of veiled and overt hatred. In 2009, “Joblessness for 16-to-24-year-old black men has reached Great Depression proportions — 34.5 percent, more than three times the rate for the general U.S. population” (Haynes). Still unchanged in 2014, “Young black males as a group also have lower graduation rates, less access to healthcare and higher incarceration rates than other racial, age and gender groups in the U.S. And in 2014, the particular difficulties this group has in dealings with law enforcement became headline news resulting from events in Ferguson, Missouri, and Staten Island, New York, involving the deaths of young black men at the hands of police” (Witters and Diana Liu). As of yesterday add Baton Rouge, Louisiana and Falcon Heights, a St. Paul suburb, to the list. Add, add, add, add, ad infinitum. What the fuck America? Who wants to pretend otherwise anymore? #BlackLivesMatter

The Rev. Dr. Martin Luther King, Jr., delivered his iconic “I Have A Dream” speech on August 28, 1963, yeah 1963, on the steps of the Washington, D.C., Lincoln Memorial during the march on Washington for Jobs and Freedom, yeah Jobs and Freedom, (still in need of that). Today, more than 50 years later, yeah, 50, snippets of his words keep ringing in my head, ringing like a bell that needs to be heard:

This sweltering summer of the Negro’s legitimate discontent will not pass until there is an invigorating autumn of freedom and equality. Nineteen sixty-three is not an end, but a beginning. And those who hope that the Negro needed to blow off steam and will now be content will have a rude awakening if the nation returns to business as usual. And there will be neither rest nor tranquility in America until the Negro is granted his citizenship rights. The whirlwinds of revolt will continue to shake the foundations of our nation until the bright day of justice emerges.

Standing on the capital steps in Montgomery, I was overcome with emotion. I could feel bravery on every inch of that stone. I could feel suffering, slavery, oppression, and resilience. I could feel relief and hope in the Voting Rights Act of 1965. Weeping, I could feel the sorrow, the loss, the sadness, of all that never came to pass. 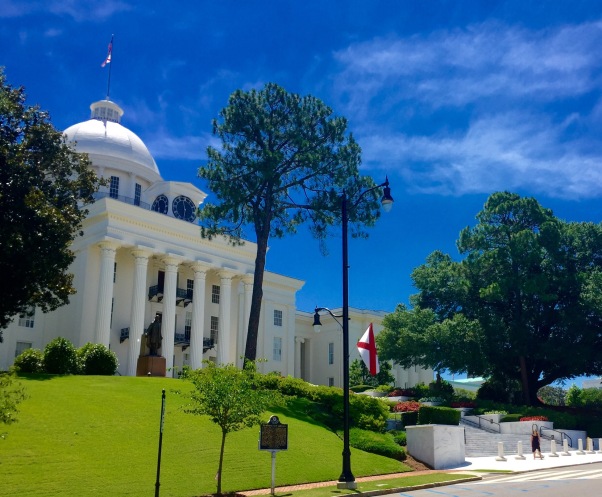 The futility, the urgency, the oh my god, open your eyes America, we can’t stand indifferent anymore. All of that on those white steps. Those. White. Steps. The anger that is needed. The love that will lead us through. The faith. The history made in our future. Our America.

I have a sweet friend to thank for the following response to the last few days. Melissa, an angel speaking for many of us, and certainly for me, wrote the following on Facebook:

Have integrity. Be your word. Stand up to those who are not right. Become a role model for our children, show them how to treat everyone with equal respect and love. We make a difference when we stand together, as love is more powerful than any weapon and it always wins. For those who are choosing hate, you will lose. I do not know the level of fear and grief some of my friends are feeling during this time in the world because I am white. This year has been one filled with a lot of love for me but I am unable to feel it fully when the world or people around me are hurting. No vacation or yoga / meditation retreat can fix it. It makes me feel better temporarily but I must be more active in the way I live as an American citizen.
I stand for:
Stopping police brutality against African Americans and all minorities.
Making new law enforcement more accountable.
Erasing racial inequality.
Abolishing institutional racism.
Ending mass incarceration in the U.S.
Joining protests in my city and supporting those protests across the country to demand changes on how police deal with minorities.
Using my voice beyond social media. Engaging others in the grocery store, at the gas station, in my dance class, at the beach , walking down the street in my neighborhood, at the airport, in my car ..

I am sending love to you all and I want to hear your stories about the injustices you have experienced so it continues to fuel my fire to act and speak up. Anything I can do is better than the inevitable gut wrenching feeling I get every morning when I look at my phone and start to cry as another injustice goes unpunished. But I do believe we have the power to make it better because there is no other way to exist. I will never stop believing that . Help me be the change I want to see in the world and suggest anything I can do more of, because the pain of doing anything less has become unbearable.

Let’s get it together America. Start talking. To neighbors. To relatives. To anyone you’re sitting next to right now on the bar stool or airplane or train or bus or where ever, talk. Talk about the deep shit. Cause seriously, Black lives matter. Gay lives matter. The Other matters. Act Up and Speak Out. In truth, America must matter. All of us. Must. Matter.

I voted early because I just might explode with anger if I wait one more day. I wish I felt more hopeful about the process but I’m just not that naïve anymore. Our founding fathers might have been amazing for breaking from a monarchy but we are still miles away from caring about people of color or women or being stewards of our small Earth.
Backyard blooms
One more just because love is the best 🌈💗‼️#bacheloretteparty #summerwins #northhollowberryfarm
Love in the Sun for this Bride to Be ☀️☀️☀️and so much fun 🥳🌈❌⭕️❌‼️#northhollowberryfarm #stowevt