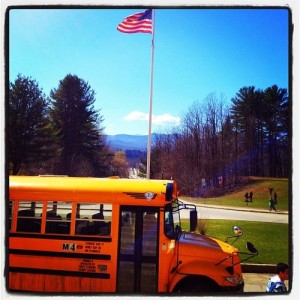 When I first started teaching high school twenty years ago fire drills were the norm. We teachers escorted our students along the designated route out the building to just beyond the parking lot. In winter these drills weren’t as enjoyable as in the Spring but whenever they occurred students faced a blast of fresh air and a chance to flirt with whatever classmate they lined up next to that moment. Interestingly, I don’t recall much anxiety from the majority of students who walked through this routine during their 12 years of compulsory public education.

Since the Columbine school shooting we have Lock Downs added to emergency protocols. No longer are we only practicing a swift and orderly exit from the building in case the old boiler is smoking or a kitchen fire needs attention, but preparing for an Armed Intruder whose sole purpose is to cause bodily harm to students and/or staff. The procedure we follow is outlined in the Vermont School Crisis Guide:

Unlike the fire drills, lock downs by their very nature create terror. Inevitably, minimally, one student will ask me if this time it’s for real, and this fear has significantly magnified since the Sandy Hook Elementary school massacre. As we sit in the darkened classroom we talk, not about Shakespeare or Hugo but about something, anything, that might alleviate the palatable tension. After every student and staff member has been accounted for by the administration (and in my small high school this takes at least 30 minutes) we resume our day: we lift the shades and move about the school building once again but for the rest of the day I am reminded of something ominous and unshakeable that now governs our lives.

There is no question in my mind that a conversation about gun violence needs to take place between friends and neighbors, within congregations and synagogues, at diner counters and supermarket aisles, in town hall meetings and auditorium forums, and certainly at our own dinner tables across this nation because guns are everywhere. Guns are in the hands of more people that we can even fathom. Guns are being carried not only by gang members or ‘bad guys’ but ‘good guys’ too, who have the law on their side to fire and kill: anyone can shoot unarmed children if they feel threatened in more states than not. These good guys carry their concealed loaded handgun into Starbucks as they order a latte or drive with a loaded riffle through town: they can and they do with laws granting them permission.

How many guns are being carried around by US civilians? According to HOW MANY GUNS ARE IN THE UNITED STATES? Americans Own between 262 Million and 310 Million Firearms, “Because guns are not registered, or tracked by other means, the question of how many are held by the civilian population can only be answered through estimation. Further complicating an accurate count is that our understanding of the types of firearms available is limited to the categories used to collect information at the time of the gun’s manufacture or importation. Therefore, all current estimates are limited to four broad categories: handguns, rifles, shotguns, and other types of firearms. Estimates for semi-automatic rifles and handguns cannot be produced because the U.S. Bureau of Alcohol, Tobacco, Firearms and Explosives (ATF) does not break down the data on handguns and rifles into semi-automatic and non-semi-automatic categories. This omission is tragic given the role of semi-automatic weapons in mass murder.” Simply put, guns are everywhere, in too many places for anyone to feel comfortable.

Since my post last week, I have learned that many people feel extremely resistant to talk about this topic. Conversely, I have begun researching the plethora of organizations who work tirelessly to halt the number of criminals carrying weapons and their illegal sale of guns, as well as questioning the overwhelming number of responsible and law-abiding people who feel the need to carry concealed weapons and build household arsenals. National groups like Moms Demand Action for Gun Sense in America to more specific concerns such as the  Sandy Hook Promise all invite us to arrest the influx of guns by the very powerful manufacturing companies, such as Glock, who have benefited from this alarming trend more than you or I can imagine. (Have a few minutes? Listen to this enlightening NPR interview with author Paul Barrett on the rise of the Glock).

What now? As for me, by late August I will once again be in school practicing for emergencies with my students and hope against hope that our efforts will keep us safe. As for you, I hope you consider signing the Guns Down Day Pledge, and continue to reflect on the difficulty our nation faces in terms of rising gun violence.

17 thoughts on “Locked Down”

As I embark on a Shakespeare unit with my students, nine graders reading Romeo & Juliet and AP Lit reading Hamlet, we start with questions. Questions Elizabethan thinkers might have pondered in 1598; questions we still ponder in 2018. I am struck with our timeless preoccupation over destiny: Are we the masters of our own fate? I ask students to think and write about their beliefs on this topic. Certainly, these teens, like those penned by Shakespeare, want to believe they are, indeed, in control of their outcomes, while I, I who have screamed up at the Heavens in distress, frustrated by the unpredictability of chance, those ‘why me’ moments; “O, I am Fortune’s fool” situations. As if we are pulled by strings invisible to our own hands. Just when we want/need/hope for a different outcome we must settle for what is… but as I look across the classroom at my students, into their hopeful eyes, their exuberant optimism, I see their uniform belief that yes, they are masters of their fate. They aren’t phased by headlines or politicians’ lies; they see their own trajectory as it slants up and beyond, straight into the starry night. Straight into heaven. #readmore ? #linkinbio #starrynight #literature
For all my former students and old colleagues, just a reminder of how amazing these ski trails still are…and PA in general! 🥳 #skilife #schooltrails #getoutside #peoplesacademy
On those lucky afternoons when I can skip out the door before the sky goes back to black I climb the hill and catch the light show. Pink is everything mid-January. Deliciously fresh, a promising kiss reminding us of all that will return in a few months. If there is enough daylight I’ll descend through the open field and in and out of the small woods where I saw a bear last summer. Read more? #newblogpost #linkinbio #nightlight #lightshow #january #womenbloggers #writerscommunity
Moon rising in one direction & sun setting in the other. I love when day & night collide #wolfmoon #vermont #arcticblast #getoutsideandplay ❄️🤍