Recently, I rubbed shoulders with a ‘Brilliant One’… acclaimed as Brilliant with a capital B. I was quite in awe as we

shook hands and felt the warmth radiating sparks from his star status. The whole millisecond was just that, a millisecond, but enough to feel exactly what is transmitted from contact with a capital B Brilliant One. Actually it was only a handshake and a few niceties, but you get the metaphor. Yet, despite the hoopla buzzing about, there was a discernible droop around his eyes, a downward trend across his brow, a forward curve in his shoulders: the burden of this capital B tangible and not at all enviable. As I let my hand drop, instead of aspiration, I felt something different. 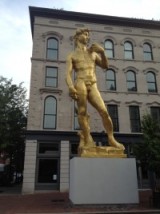 My mind instantly raced to Mr. Ramsay… you know, the character in Woolf’s To The Lighthouse, that Mr. Ramsay. I suppose, if you are one of those readers afraid of Virginia Woolf I have lost you here; but just imagine a man, a young man, of say, 25, and he is already on the pedestal, hailed as Brilliant, yes, with the capital B. See him? Now imagine him decades later, say at 60, and yet his Best Work remains in his past, his far past, and yet there are years, decades even, of possible life ahead, of possible work ahead. Imagine our Mr. Ramsay never manages to top his early Brilliance. Tragic, right? Woolf pens this character, drifting without hope for a shiny tomorrow, fretting over what other’s think of him, with her own deft Brilliance. Here, it is worth a mention, that all the acclaim came early in this capital B Brilliant’s man’s career too.

As this capital B Brilliant man’s hand left mine, and he moved on to his own table, filled with his entourage, I wondered what might be said to this man, who although might be Brilliant, his latest work fell far short of that mark. Would they ignore the topic? Would they feel compelled to lie? Would his own armor rise around him? Would he refill the martini glass until he imagined himself back on top? Or would he simply crumble under the weight? As I watched I pondered my own desktop now piled high with two novels, countless short stories, a stash of poems, a half-finished stage play, a rather sloppy screen play, and the notes for yet another book, this one defined only by a mash-up of genre; I with a sizable Unpublished stack on my desk yet still visualizing a future when I earn a capital B all my own… And I considered, might not this be better: to still be looking toward a golden horizon even from a sort of mucky place rather than falling away from the capital B unable to attain it again?

Of course, the iconic Willy Loman comes to mind, who faced the prospect of never attaining any accolades, never mind those that might come too soon in a career, but the hollow realization that the sound of applause will never come at all. Willy, seeing only dimness ahead, the bitter refection of his own shortcomings in his sons’ eyes, pushed to the gas pipe by their reproachful looks and condemnation. Along this same despondent line Langston Hughes asks us to consider:

What happens to a dream deferred?

Does it dry up

Or crust and sugar over–

Or does it explode?

A haunting poem… shuddering images of dreams unrealized… a nightmare… but for me a drive to actualize my vision.

moment I shake despair off and stop fixating on the Brilliant One’s table and glance around my own. I am so grateful for my own creative gifts, and for my companions’ forays into the spotlight. We clink our glasses and discuss all that shines in our sphere, all those riches in each and every creative moment, in the brush or word or note or bend of the metal. What would life be for us without such magic, such moments transformed by our art? Perhaps someone needs to remind the Brilliant ones that they can find their way by letting go of the labels and just focusing on the work? And perhaps we can help them down off the lonely platforms and let them join our table discussions of raw struggle and tarnished life that fills our days and nights? How different are we really, from Mr. Ramsay or Willy Loman or the acclaimed Brilliant Ones? In the act of creation we all ride along the same current.

Woolf comes to this same sentiment herself, I remind myself. She allows for pure artistry in the character of Lily. Unlike Mr. Ramsey, Lily fought against the trap of how others see her work, although tentative, she remains true to her self. In a grand tribute to the artist’s redemption, Woolf’s Mr.Ramsay does not end the novel in a dark place of failure and rejection, instead, he too reaches his “lighthouse” as Lily simultaneously reaches her own epiphany. Through these two characters Woolf directs us to keep our artistic vision in front of us, as Lily does in the final pages of the novel, and we witness triumph in the end. In the solitary act of creation, with no one looking over her shoulder, Lily achieves a masterpiece, and Mr.Ramsay finds a renewal.

“He must have reached it,” said Lily Briscoe aloud, feeling suddenly completely tired out. For the Lighthouse has become almost completely invisible, had melted away in a blue haze, and the efforts of looking at it and the effort of thinking of him [Mr. Ramsay] landing there, which both seemed to be one and the same effort, had stretched her body and mind to the utmost. Ah, but she was relieved.Whatever she had wanted to give him, when he left her that morning, she had given him at last…

With a sudden intensity, as if she saw it clear for a second, she drew a line there, in the center. It was done; it was finished. Yes, she thought, laying down her brush in extreme fatigue, I have had my vision.

Yes, the creative spark is a mighty double-edged sword and one that takes down as many as it lifts up. But if you do decide

to wield such a hefty blade, as so many of us do, use your passion to cut through all the labels, from “Brilliant” to those internal self-defeating monikers … Remember the spark that ignites all art, whether you’re on Broadway or in a high school production, whether your work hangs in the Metropolitan Museum of Art or somewhere along your local Art Hop, is all that matters; see the act of creation as that spark, the place we all have access to when we let ourselves play with the divine. Let all the false epithets slip out of your mind and on to the floor…and just design, dance, sing, draw, write, create in the celestial speare! Let Art guide you, and like Lily, you will find your vision.

It’s Thursday which means a quick walk after a long day and then write a new post for my blog. But before you head to the link in my bio, take in this pastel end of day shot. What a lovely moment… 💗 My Plan is to Face January Head On! #newblogpost #linkinbio #survivaltips #january #dusk
January 6th 2021 will stand in our minds as a frightening spectacle of unbridled violence and anarchy against our democratic America. Like all infamous days in our cable-news-social-media-in-your-face culture, visceral horror flooded our feeds, our lives, our living rooms, and rippled into the political arena like a firestorm not giving one hoot who or what it destroyed. And we all watched. For hours. Days. Weeks. Months. We watched as that horror was debated and dissected; as all the wordage like insurrection, coup, riot, protest and sedition were argued between politicians as if words still mattered. #readon #newblogpost #linkinbio #january6th #winteriscoming
As we stand on the first step of another year, perhaps most of us naturally look back and reflect, and hope to gain insight on all the experiences during the last 365 days. But I must say, having spent much of 2021 engaged in more introspection than I thought possible, today, I’d rather focus on dreaming dreamy dreams for 2022. But mostly, looking across the horizon of hardships we all fought through last year, I’d say it is time to restore hope: hopes big and small. With faith in each other all our collective wonder and desire will certainly translate into hope, wouldn’t you agree? #newblogpost #newyear #linkinbio #dreams #hope #2022 🌈 🙏🏽🥳
Two years later and still dancing in the cold. Grateful for my gals who stand by my side and face what comes our way. Together we are stronger, bolder, and will indeed survive. Here’s to the science and the truth, and to the happiest of holidays to all of you, my loves. xxoo #teachersareawesome #newblogpost #linkinbio #holidaze #dance #almaxxrebels #vacationvibes